This is my direct reflection after experiencing Pride in Seoul on May 28,2011:

I never liked Born this Way by Lady Gaga until I attended the Pride parade in Seoul today.  I have no problems with her, but I've never been a big fan of her music.  Yes, she is almost integral in promoting LGBT to the rest of society, but in my personal opinion, I feel Madonna set the landmark. 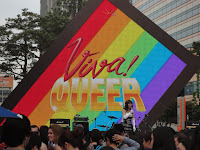 Nonetheless, I am straight.  I have lesbian and gay friends.  I try to promote tolerance whenever I can.  Being a minority, this is the way its always been.  Many people may guess I'm Indian, but I try to talk about Goa whenever I can.  My Indian friends will tell me I'm not "Indian enough" or "white-washed", sometimes it gets through to them that the way I am is because I was born in Canada or my culture is inundated with Western influence so sometimes I can't help it.  I've always wondered what it means to be Indian.  I've always wondered what it means to be truly understood.  Not pidgeon-holed or assumed to be something else. 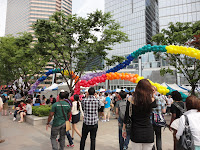 Which brings me to the Pride Parade.  I live in Toronto.  Unfortunately, I've never been able to attend the Pride parade in Toronto, which made me want to attend the Seoul parade even more.  Call it the Eastern culture, but they are more conservative, believe in family values and tradition (even more so than their Western counterpart), so I was even more curious to see how Koreans would react to this parade. I love being around people that just don't care.  Don't care about what people think of them, what society makes them believe they should be and people that challenge the dominant views of society.  What I liked even more than seeing the turnout of LGBT's, were seeing Koreans bringing their families to the event.  It makes me happy to see people changing the ways of society; being more modern.  I'm a big proponent in the acceptance of the LGBT community, because I really do believe they were born that way and you can't take that away from someone.  They are no different than me or you, and you shouldn't belittle them or look down on them because they are attracted to a different sex than the heterosexual community.  I do believe that religion is a driving force behind this fact, but that's a topic for another day. 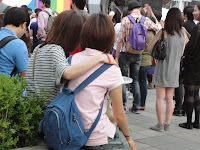 I've had many conversations with family members and others in the acceptance of the LGBT community.  I understand their apprehensions because it is something unknown to them; something that challenges the way they view the world and what they believe.  I never believe that naivete is a bad thing, just that it needs to be corrected by trying to teach acceptance.  I don't want to preach.  That's not what this post is about, and somehow I feel its going there. 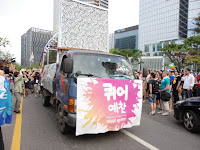 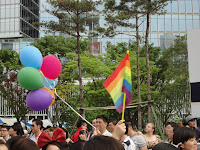 What I would like to say is that, I'm proud of Korea.  I have never been to Homo Hill in Itaewon, but I love it.  I have met some awesome people because of the Pride Parade.  I will definitely party in Itaewon again.  And its not because I love the attention I get from gay men because I'm one of the few females in the place. But because, I love to see normalcy.  And normalcy to me, is people being themselves and not worrying about judging stares and what people are going to think of them if they act themselves tomorrow or the day after.  This is how I try to live my life.
Posted by ShelleyDee at 3:47 AM