So Monday, June 6 was Memorial Day in Korea and I spent a lovely weekend on the beach (with the exception of my trip to Cuba in June I don't think I've ever spent a weekend on a beach in June).  There was a sand festival on Haeundae beach in Busan with what seemed like the rest of the country.  Quests for Mexican food took place as the restaurants were either fully booked or running out of food.  My legs were buried in the sand and I partook in chicken fights on the beach and ended up covered in sand.

Usually I find short weeks go by the slowest.  You're craving the weekend because you know its right around the corner but somehow the days drag on, and not to mention Daegu has never been hotter.  I'm reduced to wearing skirts to school (which would never happen back home) and fanning myself with a free fan I picked up from some salon promotion.  But somehow, this week would make me believe its full moon week.

The Monk who verbally accosted me
I had a monk approach me in a coffee shop (where there were only two of us: myself and a Korean) and the monk came up to me begging me for money.  The Korean was yelling at him; he never budged, the coffee shop owner came and told him to leave; still no budging, but just kept asking me for 잔원 (1,000won) and that he was poor.  Finally the owner started dragging him out to which he was still begging for money AND the Korean was yelling at him and I kept saying "anniyo" (meaning no), until he finally left.  Weird.

The Brown Crowd
I live in an area with a fairly large immigrant centre.  There are Indians, Pakistanis, Nepalese, Thai, Vietnamese, Malaysians and the list can go on.  However, whenever I come across (what I am now deeming) the Brown crowd they do nothing but stop their conversations and stare as I walk by.  I either just pretend to be on the phone or put my iPod louder as I ignore them.  Recently, I walked past a man in the morning lighting up his cigarette.  The moment I walked past him, I swear it was like verbal diarrhea- words spurting out of nowhere in a sudden burst, and just when you think it will end, there's more!  It started with a "hi! hello!" so I say hi, then "how are you? what's your name? where are you from?" so I just walked quicker and said "Canada".  That's fine.  Just a little weird.  But the other day I was walking to school and saw a car slow down and a brown face pop out and he literally watched me as I walked past him.  Very creepy.  Sometimes its a little too much.

T-Class Coffee
There is an abundance of coffee shops in Korea.  A new one opened up so I went with a friend to check it out.  The menu made me laugh: 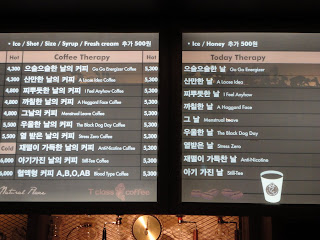 So, if you get the coffee therapy (which I did), you get this herbal concoction.  You dip it in your Americano for 5 seconds.  Then drink your Americano.  Then get a glass of hot water which you then steep your herbal concoction in and gulp that down.  It is awesome and very intriguing especially when the names of your drinks are Menstrual Leave, Haggard Face and Blood Type.

No Whitening!
The best things about beauty stores are the many freebies (or as they say in Korea "service") products you get with your purchase.  Well, I went in and made sure I asked for non-whitening products.  All flustered and flabbergasted with the fact that a waygook was in the store with the insane idea of not wanting a whitening product, they took me around until I decided on what I wanted.  Then when it came down to giving me the freebies, they went on an insane search of products that did not have whitening products in it.  Every time they dropped something in the bag they'd look at me and say "Non-whiten okay?".  It was the funniest maybe most bizarre things to happen to me, but it did make my day!
Posted by ShelleyDee at 2:23 PM