Yes, they are not known as the Samsung Orions (which belong to our baseball team, the Samsung Lions), we have a sports team where we can proudly show off our city name.  Unfortunately, our pro basketball team isn't much to proud of.  Now, I hail from Canada, a little outside of Toronto and I will gladly support the Toronto teams even though there isn't much to cheer for, so I was more than happy to cheer for the Orions, despite knowing that at the time they were ranked 9 out of the 10 Korean teams (currently 10 out of 10 in the Korean Basketball League- somehow I feel eerily at home with those stats!).

Now all the teams are allowed two foreigners and one Korean-American, probably so the Koreans get a chance at playing and teams don't import a whole foreign lineup.  Our superstars for the night were #2 Glen McGowan,  #9 Otis George, and the super fantastic #40 Lee Dong Jun (or Daniel Sandrin as he is known in the States (and by no coincidence, these three are the tallest on the team ranging from 200-206cm).
As we sat through the game and listened to all the chants- the most recognizable being "de-pens" (defense!), we started recognizing what they actually were.  The "Oh-ree-on-sah" chant made us giggle the most, but what I found the most intriguing was that the foreigners have their own chants.  The crowd chants "Oh-tis" whenever he has the ball whether he gets the ball in the net or not, and after I asked why Lee Dong Jun didn't have his own chant, I heard it play over the speakers.  #40 truly is a legend on the Orions, even though this is my assessment from just watching one game, he plays the entire game (except the last couple of minutes because they've already lost) and he is this super tall, long haired, lanky player (you really can't miss him).  Poor guy would beat himself up when he missed a shot, but who can blame him?  When you play the entire game, you're gonna get tired after a while.

However, while we watched the game and saw the point difference grow larger and larger, they don't stop short on entertainment value.  The cheerleaders aren't the best dancers, but with their constant costume changes, and the mascots giving out free stuff during any break time there was always something to keep your attention going.
Would I go again?  Of course I would!  I would never miss an opportunity to cheer for my city's team whether they are winning or not, and for only 9,000w, how can you go wrong?  Unfortunately, the season is done and I'll just have to wait to run into Daniel Sandrin again somewhere downtown.
How do you get there?  Either you can take a bus (706) and get off around the Kyungpook University area and then take a cab to Daegu gymnasium, or just take a cab from downtown.

I actually can't wait to check out the baseball games when the season starts back up.  Until then, I'm going to have to watch the indoor volleyball games to get my fix! 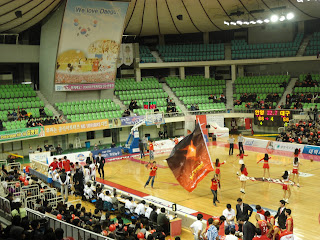