A Comedy of Errors

So, school officially gets out for the kids on December 24.  I have officially started my desk warming life in Korea.
However, for Christmas weekend we headed off to Namwon and rented a log cabin.  I have been fortunate thus far to know some good cooks, but I wasn't anticipating the feast that I was to consume!
Curry and homemade naan with mulled wine and rice krispies squares for dinner one night.  Eggs, sausage, bacon, hashed potatoes for breakfast, and 3 chickens, pork, mashed potatoes, gravy, grilled vegetables and stuffing for Christmas dinner.
Cabins as far as I know are always full of things to do outdoors, but being out in the boonies it was spent with Christmas sweaters, bb guns, Wii and mafia games, with a whole bunch of Canadians!

Then we were off to Thailand.  I can't say much because we really didn't spend that much time in Thailand.  Two days dedicated to busing up to Incheon airport and flying, then we spent two more days busing from Bangkok and Koh Chang.  So all in all, we had 2 full days in Thailand- one in each city.  What I plan more to do in this post is tell you what not to do.  That seemed to be our vacation.  And while our trip seemed like a disaster I wouldn't have wanted it to happen in a more beautiful place that is Thailand. 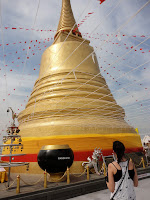 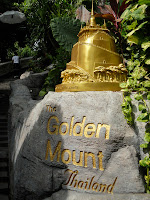 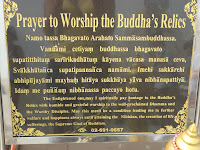 So.  Travel tip #1: Book your accommodation and transportation if you're traveling during the busy times ahead of time
This would seem logical.  But it was the last thing from our minds.  I managed to find some couchsurfers that could put us up.  The hardest part was finding a way from Bangkok to Koh Samui.  All flights were booked and every day we would find a new train that was booked to.  Luckily Bangkok has enough hostels.
We headed to the train station the day after we arrived to Bangkok and spent a good couple of hours finding out that there was no trains to virtually anywhere.  Then after talking to an agent we found out that what fit our itinerary and budget was a bus to Koh Chang.  A bus that we were told would only take 5 hours (including the ferry ride), which leads me to

Travel tip #2:  Always add at least two extra hours to travel times.
We were told that if we got on a bus at 9am from Bangkok we'd arrive in Koh Chang off the ferry at 5pm.  However, we didn't get on the ferry until about 6pm and checked into our hotel at 7pm.  That pretty burned a whole evening for us.  The ride back was even worse.  We spent 6 hours on a bus with no air conditioning.  That was the worst part but getting on the bus is for 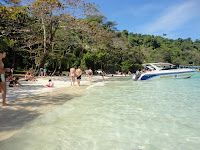 Travel tip #3: Nothing is ever organized properly.  Ever. 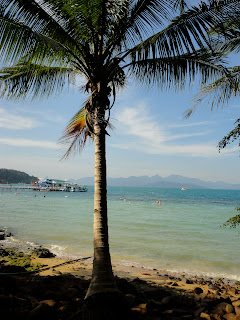 Most of the times with anything we did in Thailand I felt like we were like penned sheep following the herd.  Almost like the blind leading the blind.  There's no point asking anyone questions because they give you the runaround (like they're politicians or something), so you're just doing whatever any other foreigner is doing.  We were told when leaving Koh Chang to be on a ferry at 11, but our bus wasn't leaving until 12:30pm.  After hearing one thing from the front desk about taxis going to the port, we found out we had to hail our own taxi.  Let me explain these taxis a bit.  They're more like trucks where they try to pile as many people into the back as possible (and if possible they can stand on the back) with all the luggage thrown on top (with nothing restraining it down.  How the luggage stays there is beyond me), and they drive to different hotels seeing if people are there regardless if they or not.  This taxi ride ended up being about 20 minutes longer than expected.  When we got to the port, we ran to a travel agent to call the bus and tell them we might be late.  As soon as she finished we walked towards the ferry to find that they just started sail, so we had to jump on... literally.  So we get off the ferry and there's a bunch of us on that bus.  They take one load of people in a taxi and tell us to wait.  About 15 minutes later the taxi comes back and takes us to the drop off point, however, there's nobody there.  It seems the bus took off even though they knew there was another bunch of people coming.  We wait half an hour, get on the heatbox bus and begin our travels back to Bangkok.

Travel Tip #4: Know basic etiquette and survival language
This goes for any country you go to.  I find its the most amount of respect you can pay someone if you can at least say hello and thank you in the language of the country you are in.  You also don't seem like a dumb or ignorant traveler.  Having said that, I was just like this in Thailand.  I had no idea how to say hello or thank you for the entire time I was in Thailand.  It was just nice to actually speak in English to the natives that I took advantage of it.  Also, living in Korea, you don't tip when you go anywhere (great perk by the way!), but we had no idea the entire time we were there if you do tip or not in Thailand.  Also, the taxi's and tuk tuks in Thailand have a tendency to go off meter when they know they're driving tourists.  Its always good to know how much it costs to go from here to there, and remember you can haggle when buying anything, including taxi fares.  Getting off the bus from Koh Chang, a taxi driver told us it would cost 200baht each to drive us to our hostel, when in reality it only cost 50!

With all of this, and the many other disasters that came upon us, this trip was still worth it.  Thailand is beautiful.  Full of culture, history and a million things to do, I'd definitely come back here time and time again.  We were warned about people taking advantage of us because we were female tourists but as long as you know what you're doing and don't believe everything you hear- you're fine.

Palaces, Buddha's, beach, bike rides, Kho San road, Dr. Fish, Thai massage, snorkelling, tourists from everywhere but North America- it was a great trip although short lived.  Hopefully the next time I go it won't be so crazy 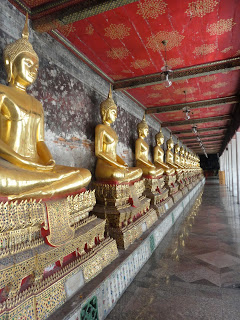 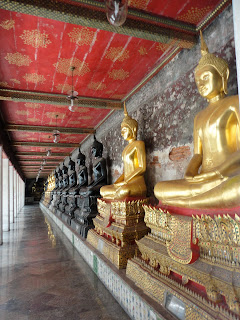 Posted by ShelleyDee at 9:01 PM