From the time the earthquake hit Japan I have been bombarded with, what I believe to be, nonsensical and crazy "facts" from my co-teachers and other Koreans that I know.  Now, I am not in any way, belittling or criticizing Koreans for their lack of commonsense because North Americans are no different at times, but information is only as good as its source.

The day of the earthquake, my coteacher came back to our office after talking to her coworkers and told me that I shouldn't spend too much time outside because the radiation would affect me and to use an umbrella if it were to rain because of any "bad things" that it might contain.  I just brushed it off.  If there really was anything to fear I would hear it somehow on one of the many news sources I check up on throughout the week.  I know in North America, America mainly, the news is mainly based on fear.  Following the same theory in Michael Moore's movie, "Bowling for Columbine", the media is constantly instilling some sort of fear into the public, which is clearly happening in Korea as well.  I've heard stories of my friend's coteachers saying they don't want to go to Busan due to fear of radiation, and this was after the initial shock of hearing about the nuclear reactors getting hit in Japan.
Today (April 7th) was the first rainfall after the earthquake and everyone's Facebook status' are commenting on the radiation, we've all been warned about using an umbrella, and now I'm blaming my headache, laziness and lack of brain usage on this "radiation".

Either way, this whole thing got me thinking of the one thing Koreans fear the most in this world- fan death. 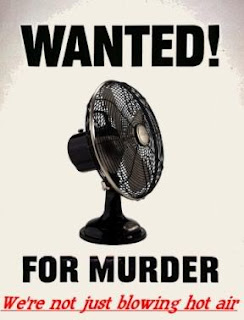 Yes, the thought that leaving a fan on in your house with the windows closed will swallow up all the air molecules causing you to suffocate, has been proved "scientifically".  According to the Korean media, they will have everyone believe that people die regularly due to sleeping at night with the fan left on.  Electric fans are sold with timers on them, so if the nights are too hot and sticky, you leave your window open and set that timer or else you will never live to see another day.
I have a friend that freaks out if she hears the fan running, even if she is in another room AND the windows are open.
In trying to find other sources about fan death, I came upon the Ask a Korean blog:


"Here is the science of how a fan could kill. Remember the conditions under which Koreans say Fan Deaths happen – summer (=heat), enclosed room, fan directly on the body. An electric fan cools your body in two ways: by pushing cooler air onto your body, and by allowing your sweat to dry rapidly and take away heat in that process.
But clearly, the fan does not generate the cool air on its own, unlike an air conditioner. And eventually -- especially if you are a passed-out drunk who is already somewhat dehydrated from the alcohol -- your body will run out of water to turn into sweat. So what happens when it is very hot, but the entire room is enclosed such that no cool air comes in from outside, and you have no more sweat to cool your body with?
Basically, the entire room turns into a gigantic turbo oven. Turbo oven is a conventional oven that has a fan inside that continues to blow air onto the food. This oven is known to cook at lower temperature than a regular oven, yet cook more quickly. Similarly, in a heated room without an outside source of airflow, very hot air is constantly pushed directly to your body, which is a far more effective way of raising your body temperature rather than “baking” in hot air. If you get enough of this, you would die – of hyperthermia, or abnormally high body temperature.
So Korean people had it right after all – fans can kill. They just tend to give the wrong reason." 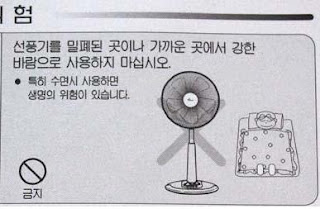 Fandeath.net is probably the most comprehensible website on this different wavelength. So, take what you will.  However, this notion of Fan Death does not exist outside of Korea.  I don't aim to ridicule their beliefs, because this happens in North America as well (the media portraying a certain way of the world that people believe although its not true at all), but here are a few other things I've been told that I've had to think twice about:
- kimchi curing cancer/ being a preventative measure against SARS or H1N1
- the fat in samgyeopsal (삼겹살) is good for your throat as it coats it to prevent dirt/dust from getting stuck in it (now some of this may be true, I was just confused when my diet crazy friend told me that fat was good for you)
- grey hair is really just dead hair that has no hope for growing back.  So unlike the tale that we tell where if you pull out a grey hair three more will grow back, its a Korean myth that if you pull out grey hair no hair will grow back in its place
- If you hear a magpie at morning you will get good fortune/news, if you hear a magpie at night you will get bad news
Posted by ShelleyDee at 9:25 PM