Well yes, its been a while since my last "adventures in Korea" post, so lets see...

Getting some Me time
Dr. Fish 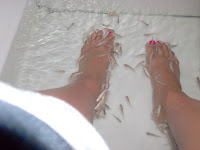 According to Wikipedia Doctor Fish were found in Turkish spas and were used to treat patients with psoriasis.  They actually nibble away the dead skin so that the healthy skin can grow back.  Let me tell you, this is best damn concept anybody has ever come up with!!
The whole concept is a little funny to us, but we arrived at the coffee shop (yes, its in a coffee shop).  For 5,900won you pay for all you can eat bread, butter and jam and coffee (just this alone makes me a happy camper!) and then once your belly is full of bread and coffee you make your way up to the foot spa area.  These little pools that you dip your feet into while these little fish nibble away at every crevice of your feet.
I don't think I can fully explain the feeling of these guys.  It feels like little bubbles, then it gets ticklish as they eat the balls of your feet, and then it turns weird because you're seeing them at work and you know what they're doing and you don't know how to feel about it all.  Either way, my feet were pretty nice and smooth after and I totally expect to come here as many times as possible. 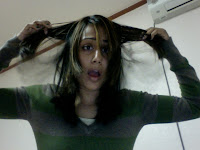 I didn't chop off as much as my shortest haircut, but a good chunk of it is gone aaaaaaaaaaaand its permed straight.  Yes, I've undergone the Magic Straight treatment and never have I ever had hair this straight for so long without doing anything to it!  It ended up being a 4 hour long extravaganza.  My stylist was amazing!  The poor girl's stomach was growling but she didn't stop and just kept cutting.  Then she gave me an additional treatment because my hair was damaged (which is essentially not like Korean hair) all after hours.  Nowhere in Canada could I ever get this service! 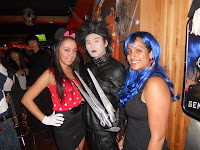 I have never been into Halloween.  Having to endure a whole week's worth of lessons about Halloween plus having to go shopping for some kind of costume made me already weary of the day before it arrived.  Needless to say, most Koreans don't do anything for the day- just whatever they've learned from movies/tv shows and other English teachers.  But I was quite impressed with the quality of the Korean costumes.  There are no costume stores in Daegu so there's no choice but to get creative.  Initially thinking of being a Harajuku girl, it was just too hard.  There's enough eccentric clothing that it became incredibly overbearing.  Just a blue wig, some blue and green tights and neon earrings and I think I turned into a go-go dancer.  But best costume of the night by far belonged to Edward Scissorhands, and the ajummas!
Here Comes the Bride 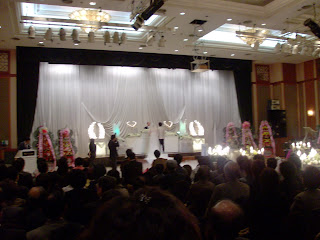 My first wedding in Korea belonged to my Principal's daughter's wedding.  Although, don't ask me what happened, I wasn't there for the actual wedding!  All the teachers were invited and we showed up about half an hour before the wedding and we left just after it started.  Why did we leave?  The gigantuous hotel didn't have enough seats to accommodate the massive amounts of people that were there and we went to eat lunch instead.
Daegu in Motion
Korea In Motion is the largest non-verbal performance festival in the nation, featuring performances designed to break through the use of language and cultural barriers through music, martial arts, dance and physical comedy to portray ideas and feelings.
I ended up scoring free tickets to a couple of shows, I ended up seeing the shows of Break Out, Return and Sachoom.  While the shows were pretty awesome to watch, the descriptions provided were even better.
Break Out
Based on the break dance, and it is newly made "Extreme dance comedy" that was made by applying acrobatics and shows a fast story development dance with impact and acrobatics.  Popping and breakdancing at some of its finest, gratuitous female dancing that contributed nothing but to show some flesh and bad dancing,  but special shout outs go to the beat boxer!
Return
Heart beating in 90 minutes!  It feels alive just NOW!!  Exciting and Real Street Dance!!  Dynamic Performance in 90 minutes with great moves and music.  The fantastic Gorillacrew's performance that has humanity and strength.  The Great musical which attract audiences-- RETURN!!
I have to say though, the break dancing was awesome!!  Its funny to hear Koreans oooh and aaahhh over the smallest movement but it was pretty impressive.  Gorilla Crew rocks!
Sachoom
It is a festival which the stage and audience become the one from the opening and end while mixing a hiphop, jazz, break dance and modern dance delightfully in the the simple story that everyone will feel sympathy in any countries and times.
Nowhere was I ever ready for what I was about to watch.  Yes, the show was comprised of all different forms of dance, but I wasn't expecting what I got.  Birth dances, pornography, growing up through the ages and battling your psyche were just a few of the themes, but never will I forget the birth dance.
Its not everything but 0:20 made me giggle like a little kid.
Posted by ShelleyDee at 11:05 PM