Is pretty much all I can say about my landings and getting my surroundings when I arrived here in Korea.  No amount of reading and researching about this place can actually get you ready for this place!
I arrived in Seoul at 4am, and had to wait for my transfer flight to Daegu at 8am.  By the time I had arrived in Daegu, I was incredibly tired and out of it.  Riding in the taxi to my Daegu Metropolitan Office of Education (who would then tell me what school I was teaching at and where it was and all that seemingly non-important information they cannot provide earlier but the same information that everyone asks you about before you're leaving which I had no information for which makes everybody believe your lying to them!) all you see are just signs in Korean- a gazillion signs, there are stores everywhere here!

I get to my school, its a pretty big school.  Janggi (징 기) Elementary School.  I teach grades 4-6, each grade with a different co-teacher.  Ga Young is my official co-teacher (almost like my superior), Ju Young is my grade 4 co-teacher, Sun Young- grade 5 and Ju Hyeon for grade 6.  I meet them, then head off to my apartment.  Pretty much, its a bachelorette pad even equipped with a queen-sized bed!  I got myself ready for the bathroom though- as if indoor shoes aren't enough here, there's also a pair of bathroom slippers because there are no shower stalls in the bathrooms!  The open space consists of my shower stall! The kitchen is small.  I'm also going to have to clean this place up- the guy who was here before wasn't too much of a clean freak... 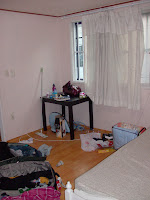 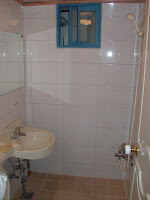 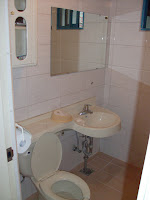 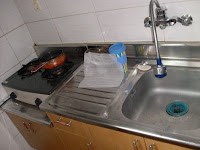 Like there's not enough convenience stores (Family Mart, Korea Mart, 7/11, and GS25) and small grocery stores, the biggest grocery store near me is Home Plus which is owned by Tesco.

I live about a 10 minute subway ride from downtown, and amazingly enough, a subway ride costs me the equivalent of $0.95 a ride- I ride this thing like its nobody's business!

Thank goodness for my TV!  Having no internet and no phone, the television is the only thing keeping me sane!  Although, most of the stations are in Korean, and about 1/3 of those are Korean infomercials (which makes me believe I really did sell my soul to the Devil by working at the Shopping Channel because I'm subjected to this damned consumerist culture forever!) there are about 5 channels that play English speaking shows most of the time.  PLUS I get CNN... not the greatest news outlet, but at least I hear stuff outside Korea!