Yes, the two words that most old Korean men know.  I spent 90 minutes on a train where I had to listen to an ajoshi (old Korean man) tell me those two phrases.  Not once or twice, but repeatedly, and he had to hit me to tell me.

Ok, lets go back...
I went to Busan for their Fireworks Festival- an expected 2.5 million people were supposed to be there on Gwangali beach. 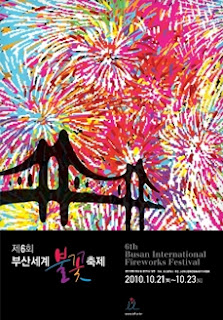 We got there on the Friday for the World Fireworks display (from China, Portugal and Italy).  Koreans live in a very Confucius society, where they believe in respecting their elders, so much so, that if an older person pushed you out of the way you shouldn't do anything back.  Caitlin and I are standing in this already packed area waiting for the fireworks.  It wasn't too horrible until some people decided to leave which caused some older women to believe that they could push and trample and elbow their way to the front, and while they decide to do this, some more people are leaving and I ended up right in the middle of this stampede.  Words cannot even describe this event, and while you hear many Korean girls whining in pain, nobody can do anything and against my impulses to push these people back (which I would have done if I was back home) I just tried to laugh at the craziness!
Either way, the fireworks were pretty amazing! 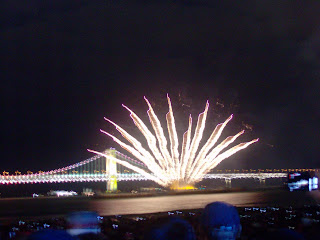 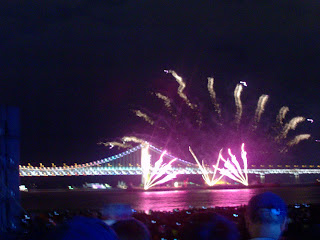 Then Saturday came along.  Now, I'm not one that eats at Indian restaurants because I'm too spoiled by my family's cooking, but I've been missing some curry and lassi.  Namaste in Haeundae is AMAZING!! Nothing like some garlic naan (not naan bread) and mango lassi and paneer! It was good for the soul... makes me miss mom's cooking, so now I have to get on the cooking train!

Then we headed off to Gwangali beach, at 3pm, the city was incredibly busy and we had to go all the other way around the city, through the bridge, which was totally long-winded but with a nice view!  The cab driver thought I was crazy, and there was talks of my monkey circus and all the nonsense that comes along with it.  I guess this is what happens when you hang out with your friend that is still drunk from the night before!

We then spent 4 hours on the beach waiting for the fireworks.  It is very interesting being in Korea. I used to get stared at because I'm the "alien" living in Korea, but its slowly changing.  I was walking along the sidewalk and this Korean with this humongous SLR Canon stops me and starts taking my picture, then a mob of Canon-ized Koreans start taking my picture.  Now, I'm not posing, but these people are all up in my face and I'm dying of Shelley laughter until I finally run away.  Then we're sitting on the beach and this Korean family sits in front of us that we made some kind of friends with.  The little girl would always listen to us- and hopefully she didn't pick up too much of the bad language, the mother gave us mandarins and would laugh with us at times.  Then these ajuma's (old Korean women) managed to take up the back of our mats and sit there, but they ended up being supernice letting Andre and myself lie down on their jackets!

The fireworks were amazing.  Like the whole sky against the backdrop of the bridge and water was lit with fire and colour and lights.  It unfortunate that I have the world's worst camera, so I can't bother taking pictures, just a lot of videos.

We partied... drank quite a bit of soju and beer... and then when time came down to leave, it took about 45 minutes to catch a cab.  I don't know if it was because the event caused so much traffic, but there were virtually no cabs in the Gwangan area, and with everybody trying to find a cab home, it was near impossible.  One of my friends tried to pay off Koreans that were driving their own car to take us back home (which really wasn't that far off), but yes, absolutely ridiculous!

And now back to my story I started at the beginning.  To take the train from Busan to Seoul (which is the one I get on) is crazy and so the only tickets we could get for the next 2 hours were standing tickets.  We went to the Cafeteria train- pretty much where everybody goes if they're standing and we sat on the floor.  An ajuma was proud of the fact that I was sitting on the floor, and then these ajoshi's (old Korean men) started talking to us.  Now I'm no stranger to local people talking to or my whomever I'm with when I'm the foreigner, but this was nothing short of ridiculous!  This man must have been drunk, but he gave me his phone number and wanted mine.  He somewhat stole my Korean phrasebook saying I didn't need one.  He wanted me to write Thank You in Hangeul (the Korean language).  Then an ajoshi sitting behind me started yelling.  I don't know why and who at, but it got people's attention and it made the drunk man shut up for a while.  Now anybody who knows me, and what I'm like when I'm frustrated, would be amazed at the new level of frustration that I was at.  Like no matter what I could say to this man he would not leave me alone, and he would perpetually hit me to get my attention, even when I was talking to Caitlin, or trying to "sleep".  And finally about 10 minutes before we get off we found out a Korean girl sitting next to us could speak English and we asked her to tell him to stop, and he did.... FINALLY!

Nonetheless, despite the craziness of the weekend, we made a new friend! Huzzah!  Nothing like making a new friend!!

Today's lesson: the next time you're drunk and decide to talk to a younger person that doesn't speak your language one bit whatsoever, learn another phrase other than "thank you" and "I love you" so you don't aggravate these people.

Posted by ShelleyDee at 8:53 PM