Week 1- The first of my thanksgivings

I'm a little behind on blogging, so to recap my life thus far.

I arrived in Korea, September 17th, and spent the day unpacking and getting familiarized with my new environment. Saturday afternoon my co-teachers took me out to lunch downtown.  I don't really know how to describe downtown, the best I can do is Oxford/Regent/Carnaby (my favourite amongst all!) streets, but add in a few thousand stores more!  I also met up with the Korean girl that I had been Facebook introduced to a few weeks before I left.  So, it was incredibly nice to hang out and meet a bunch of English speaking people in the city where hardly anybody speaks English.  As well, this little rendezvous got me over jet lag pretty quickly- I didn't get home until 5am! I am not used to living in a city where restaurants and bars are open to all odd hours of the night.

A few things about nightlife here:
- everybody drinks- its a Korean past time (no joke), these people drink any time of day, whenever they can.  They drink beer (Cass and Hite are the draft beers here and go for about the equivalent of $3 a glass), soju (their distilled alcohol which rivals vodka.  Its about 20%ABV and about $4/bottle) and makgeolli (cold rice wine, white in colour and about 6.5-7%ABV.  You can buy them in bottles or get them in a kettle or a big soup bowl and traditionally drink out of mid-sized soup bowls- I prefer drinking this).  Oh, and you can buy all these plus whiskey and wine at the local grocery store.
- there is no cover for bars and you can almost likely bring in other drinks from other places, which brings me to my next point:
- you can drink on the streets, anywhere you like!  In fact, if you go hiking (another pasttime of Koreans), at the top of the mountain it is quite common to see old men (ajoshhi's) drinking makgeolli and will pour some for you!


Alright, besides drinking and the nightlife, Daegu is the third largest city in Korea.  It is located: 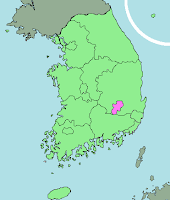 So yes, I'm away from Seoul and North Korea.  However, because I'm more centralized, it is quite easy to travel to pretty much any city in Korea.  Daegu is home to a US military base and also has quite a small expatriate community (waegook as the Koreans call us), the Western bars are located in one area in the downtown area, the drinks are more expensive, but its nice to spend some time with people that speak the same language (for the most part- sometimes not the same intellect!) as you.  However, in the month that I've been here, I've run into same people almost every weekend I've been here.
Okay, I digress, what's been going on with me:
Monday, September 20 was my first day of school.  It consisted of four classes, which was just me introducing myself and being bombarded with their questions- the most frequent being if I had a boyfriend/married, if I knew Yuna Kim, and what was famous about Canada, and because I didn't know Korean they made me say "annyoung haseyo" (hello).
September 21-24: Chuseok- Korean Thanksgiving.  I had these days off.  I tried to explore the downtown area because it's such a huge maze.  I wish I knew about this holiday before so I could have done something more productive with my time! No holidays really give you this much time off.
September 25-30: Trekked up to Seoul for my EPIK orientation.  There are two types of English teachers that come to Korea- Public school and Hagwon (Private school) teachers.  As a public school teacher we have to go for a 5 day orientation.  Full of lectures and other boring stuff, we did get to meet a whole bunch of people that were living in the same area as you and all over Korea, excluding Seoul. 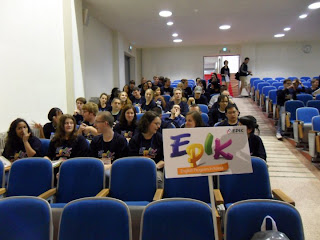 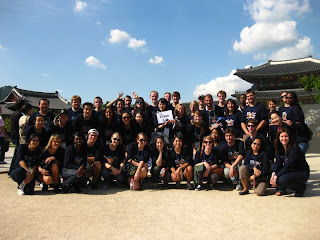 Needless to say, I met quite a few people here.

Highlights of Orientation
- 3 Bears- Korean Song
- I can sing this in its entirety PLUS do the dance!
- The couple of hours after class was done to midnight curfew (yes! We had curfew, which we broke on our last day!)
- Kings Cup!
Posted by ShelleyDee at 8:08 PM