A Waegook in Korea

To get you up to date, its now been a month officially since I've been in Korea.
Many people claim that I should have had a rough patch somewhere along the line, but luckily I haven't encountered such bad luck.  In this month:
- I officially am HIV/TBTE free! (says my mandated health check)
- I am an alien living in Korea (as my Alien Residency Card states)
- I have internet and a cell phone (the final furnishings of my card)
- I have money in my bank account (wahoooooooot)
- I have discovered that another Waegook lives in my building (where I believed none existed around me!)
- I have started Korean classes (I can somewhat read the Hangeul alphabet, I just need to memorize it), and I know the basics
annyoung haseyo- hello/how are you
kamsamnida- thank you
annyounghi kayseyo- good bye
waegook- foreigner
yuk- subway station
sonsangnim- teacher
bop- rice
mul- water
jusayo- please give me
yogioh- to call a waiter/right here

Its good enough to get by now!

I hopped off to Busan the week after Andong, my friend from back home has been in Busan for a couple of years now, so my new life in Korea wasn't complete without going to visit her.  A Philippino movie "Here Comes the Bride" was playing at PIFF (Pusan International Film Festival).
A sidenote: Korea has just changed the way its alphabet is being viewed worldwide.  The old way viewed the letter "b" as "p", and "d" as "t" (or for those that know, they took the voiceless and viewed it as its voiced equivalent), only now are they changing the names, so Daegu may come up as Taegu, and Busan as Pusan (hence the name of the film festival; they're not changing it)
The movie was hilarious!  Nothing like some good foreign movies to cleanse the soul of North American garbage! Sadly, I didn't get to experience the beach or do any real sightseeing, HOWEVER, if it wasn't for Jaimi and her wonderful friends, I never would have experienced Canadian Thanksgiving here! I never realized how much a Costco saves a foreigner's life, and YES there is Costco in Korea!  We had whole chickens, cranberrry sauce, stuffing, potatoes, salad, macaroni and cheese, nachos (WITH CHEESE!!!), pizza, pumpkin pie (!!) and wine.  It was wonderful, beautiful and amazing all at once.  (and for the record, this is Thanksgiving #2 I've experienced thus far!)

In the middle of the week, I needed to get out, so with Corinne, we ventured to Suseong (in Daegu), ate some dukgalbi (duck), and discovered a random waterfall (now Suseong must be the richer part of town) and we watched a water show! 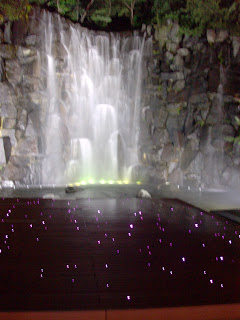 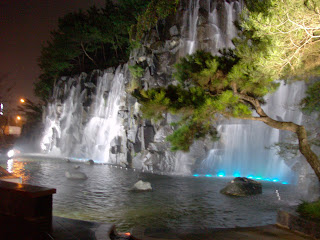 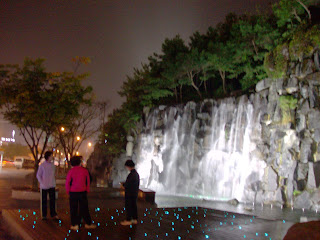 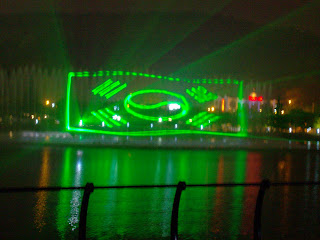 Last but not least, this past weekend (October 18) I spent in Daejeon with some of my favourite people (as it turned out to be a mini reunion of EPIK Orientation) and rocked out to some not so good and really awesome bands!  They had international food pavilions as well.  It was funny (to me at least) how the Indian food tent had the longest line up all night!  I ate some good ole fashioned chicken shwarma at the Turkey tent, but I was craving some mango lassi!
The music was about a 50/50 split of Korean and Waegook bands.  I heard some hardcore (reminded me a lot of Alexisonfire but only coming from one guy), some Green Day-esque bands, ska, reggae, and this one band, had this chick that was hardcore (Stephanie, if you're reading this, she's like the Korean Priya Panda!).
Daejeon's downtown is just as nice as the city, but my goodness, there were soooo many foreigners!  I like the mixture of Koreans to Waegook's but, this was just too much. Call me a snob, but somehow I believe I have transcended past the first level of foreigner to a second level...? (Don't ask me what that second level is) but maybe its because I have some Korean friends, maybe its because a lot of my friends here have been in Korea for more than a month and appreciate Korean culture where you don't have to go to the foreign restaurants/bars all the time- whatever it is, I feel a little more attached to Korea and I can't wait to experience more! 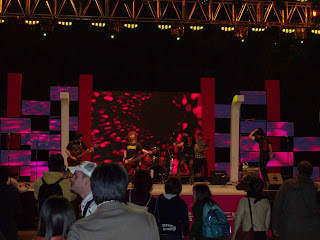 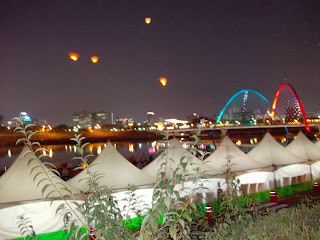 Posted by ShelleyDee at 9:05 PM